﻿
﻿ Every once in a great while, I like to do a "theme" night.  I started the idea actually a long time ago when we were very poor and the only thing to be found was a few hot dogs and a can of pork and beans.  What could have been a very boring meal was actually fun when you make a cowboy picnic out of it, dressing the part, and eating by candlelight (campfire).  So, now I continue the tradition by having an occasional theme night at dinner time.

A lot of the traditions we have about Christmas actually started in the Middle Ages --the Renaissance period.  The traditions we know of gift-giving was centered usually on Epiphany, but differ very little from the practice we know and love today. During the Renaissance and Medieval revels of Twelfth Night, gifts were given, in remembrance of the Magi's gift to the baby Christ. Nowhere was the tradition of gift-giving more lavish than in the royal courts of the age. Those wishing to curry the favor of the Crowned Heads of Europe would take the Christmas holiday as their big moment. They would travel from all over Europe with expensive gifts in hand, and pass them into the king or queen or princes' waiting hands, in hopes of receiving whatever boon or title for which they so wished.


With a little bit of Internet exploring, I came across a few foods that I made this evening, reminiscent of the Renaissance era, using honey, which I am assuming would have been available, although how readily I do not know, and most probably only to the rich.

Cremoneze Tart with Honey
1/2 pound spinach, washed, chopped
1/2 c chopped mint (I actually went out in 6 inches of snow, dug through the mulch and discovered plenty of mint under the snow!!)
2 eggs (our own of course)
1/2 c grated Parmesan
4 T melted butter
1/4 c honey
2 T currants (no currants found here, so I used dried blueberries --you could easily use raisins or dried cranberries)
1/4 t cinnamon
1/8 t nutmeg

Mix all ingredients together.  Put into deep dish pie crust and bake at 350 until done, about 45 minutes.

This dish is reminiscent of a quiche, but is different in that it has quite a bit of sweetness to it. It could be used as a main course, but we chose to use it as a vegetable side dish.

Bread Pudding with Honey
Tear up enough day old bread to fill a medium size baking dish. (I found some rolls we had brought home from our steak house the night before, a few hot dog buns, and half a loaf of italian bread)
Heat up 5 c milk.  When milk is heated, add to it 5 beaten eggs, 1 t vanilla, 1/2 c honey and pour mixture over the top of bread.  Bake at 350 for about 30 minutes. Insert knife to test for doneness. Should be nice and brown and fluffs up quite a bit too. 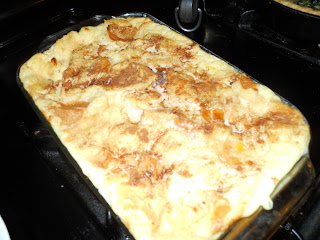