I have spent the last couple of weeks working furiously to get my garden into jars. "Garden in a jar" would make a catchy name for a vegetable company, wouldn't it? With sweat dripping off my forehead in gallons, and a near heat stroke (complete with headache and nausea), I finally realized my dream of a packed pantry.
I have also been receiving various canning recipes from gals who use honey in their recipes, so I want to reprint at least one of those here.
First, I want to give you my corn relish recipe for canning.  I was persuaded this year by a friend, who is a horticulturist at a university near-by, to try something called "kohlrabi". I can't really describe to you what this thing looks like, but it is a big green ball with numerous appendages coming out of it and tastes like cabbage/radish.  But what to do with it?  I finally decided to shred it and add it to my corn relish. I also completely substituted out the sugar in place of honey, and used up the rest of my corn, green peppers and tomatoes.
Corn Relish Canning Recipe (I remember this by adding 2 cups this, 2 cups that..)
2 c corn
2 c chopped onion
2 c chopped tomatoes
2 c cucumbers
as much kohlrabi as you can stand
1 lg green pepper
1 c honey
1  c cider vinegar
1.5 t celery seed
1.5 t mustard seed
1 t salt
1/2 t ground tumeric
Combine, bring to boil, cook 20 -30 minutes.  Put into hot, sterilized jars and follow manufacturer's instructions for canning.
Aunt Mary's Beets
This recipe was given to me by a customer named Anita whom we met in one of our classes back in March, who is sharing her Aunt Mary Hawk's recipe here, and from Anita's description, she sounded like a wonderful lady.
2 cups white vinegar
2 cups honey
2 cups water
1 tsp cinnamon
1 tsp cloves
1 tsp allspice
Boil beets (leave 1 inch of tops and root intact) for 20 minutes in water(fork tender but not mushy), plunge in cold water and slip the skins and trim root and tops. Pack in sterilized pint jars, leaving smaller beets whole, chunking or slicing larger ones. Bring above ingredients to a rolling boil and pour over beets, filling jars, but leaving 1/4 inch head space. Place lids on top and tighten rings. These will actually seal without water bath process, or you can water bath process for 10 minutes if desired.
How many beets, you say? Well, Aunt Mary sounds a lot like me, and that is when you go out to your garden and bring in the beets, you don't have any idea what you are going to end up with.  So bring them in--however many you have--prepare them as above, putting them in jars and pour the juice over.  When you run out of the prepared juice, you just make more until you have covered all your beets. That's farm cooking. You don't know what you're starting with or what you'll end up with, but it's usually fantastic.

Honey Baste for Pork or Chicken 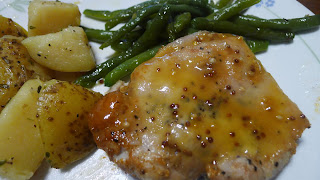 Good eats tonight with the most wonderful basting sauce on our pork chops.


It is a recipe that I change up often.  The basic premise of it is fairly straight forward, but depending on what's in the fridge or cabinets, I change the ingredients.  Don't be afraid to do this, I understand it because I used to be scared, but what's the worse that can happen--you don't like it and have to start all over again?


I made the chops in Granny's electric skillet she left me and then at the very end, I basted the chops with this sauce:


Simply stir ingredients together and keep in a jar with lid in refrigerator.  Can also be used for a dipping sauce for pretzels or veggies, or added to potato salad or sandwiches.


How to substitute: If you would rather make your own mustard, you can use ground mustard and add vinegar.  The really fun thing would be to try different vinegar for different tastes--how about raspberry vinegar?  You can substitute any kind of jelly, jam, preserves or marmalade in this recipe--I used blackberry because it's what in season and what I just spend the last week doing.


And while I'm on the subject, what is the difference between preserves, jelly, jam, marmalade and conserves?


Here's the simple gist of it.  I'm sure it's more complicated than I'm about to make it, and some great chef or cook out there will want to correct me, but I'm working with a very simple mind here, so I will give you the Sheri run-down:  Preserves is a general term to describe any jelly, jam, conserve, etc.  Jelly is made with only fruit juice while jam has bits of fruit in it.  Conserves on the other hand is jelly with the whole fruit.  Marmalade is typically a tropical fruit (like oranges) and not quite so sweet. Simple enough, and all can be made with honey instead of sugar.


Tonight's meal included freshly dug potatoes from our yard, cooked and seasoned with butter, parsley, salt and pepper along with green beans (from our yard), cooked in boiling water for a few minutes, then sauteed in olive oil with butter, salt, pepper, green onions and mustard seed. I love summer eating! 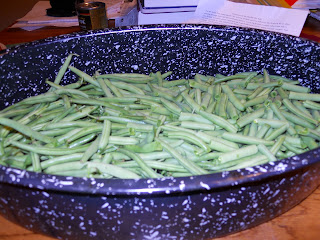