I really like Christmas.  I think it comes too early.  I believe if we had Christmas at the end of January or early February, it would make winter go more quickly.  The way it's done now, it comes at the first part of the winter, and after that it's just 3 months of ice and snow and slush.  So I think if we could get a recall on the date (it's not really Jesus' birthday on Dec. 25 anyway), I think far less people would get depressed and have cabin fever.
So every year I try to think of something different to do.  I love Christmas traditions, but I like to think of something just a little extra special.  One thing I think I will try this year is a candy making party with my granddaughters.

But I also thought I would take Christian to the Christmas store today and let him pick out one special tree ornament, and mark it with the date and his age.  And then maybe every year I would take him back and let him pick out another and then eventually have a box full he could take with him when he grew up and got his own house and his own tree.  I had planned this all out and was excited about making this a special trip.

We went into the store and he was mesmerized by the different ornaments.  He in particular loved a little tree ornament that had an actual train that would go around it while it played carols.  He pushed the button over and over to see that train on the ornament.  It was very pricey though, so that one was not an option. He finally decided on a Mickey Mouse train ornament (I really wanted the Santa Claus train ornament.).

He carried the box with the train ornament with us the rest of the morning while we ran errands.  He held it proudly in his hand as he got out of the truck and raced to find his daddy to show him.  He took it reverently out of the box and stroked it with love.

One hour later, this is what the fancy, new tree ornnament looks like: 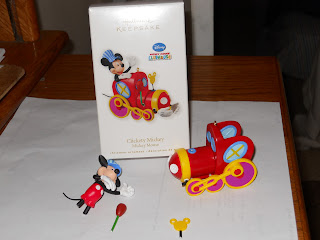